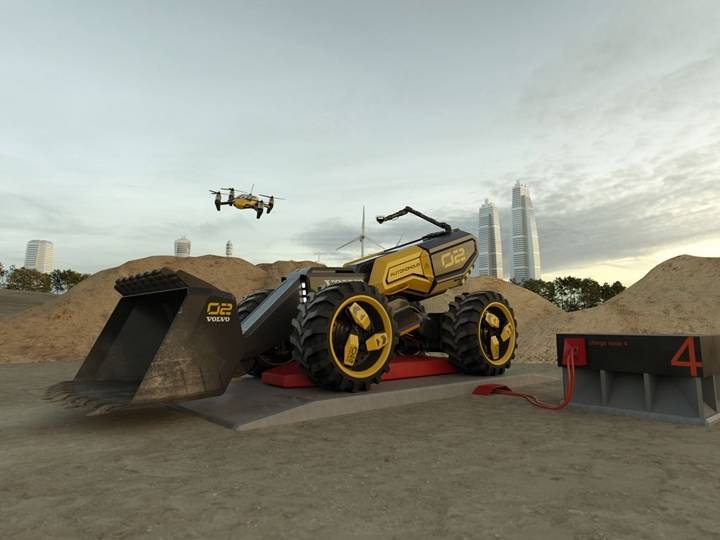 What started out as a fun, informal team building event to inspire the Volvo CE and LEGO® Technic design teams in 2016, gradually evolved into a fully fledged autonomous concept wheel loader. Their goal: Design the construction machines of the future.

The collaboration made it possible to test ideas for new types of construction machines, both in terms of functionality, scale, design and interaction and to bring a more human aspect to the artificial intelligence in big construction machines. The Volvo Concept Wheel Loader ZEUX is a realistic next step in the exciting evolution of our construction machines. A focus group consisting of children helped out in the process of creating the ZEUX. Looking at early drawings and models, the group gave feedback that led to the development of new, unique features. Two main features that the group decided on were the mapping drone and the adjustable camera boom mounted on the top of the vehicle, called “the Eye”.

VOLVO CE – INTRODUCING ZEUX IN COLLABORATION WITH THE LEGO® GROUP

Together with LEGO® Technic designers and a bunch of amazing kids, we’ve developed the Concept Wheel Loader ZEUX packed with some truly spectacular features. 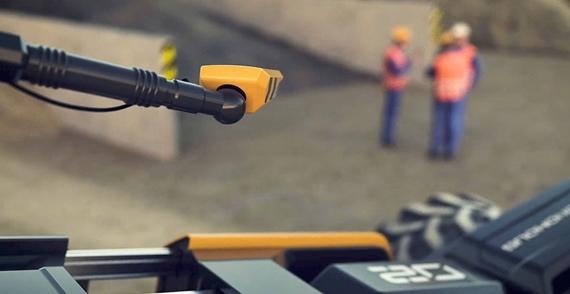 The Eye illustrates a new and innovating feature: it will show exactly where the vehicle’s “attention” is directed, which means it can make “eye contact” with humans and acknowledge their presence. This is something that does not come natural with autonomous vehicles, because a human normally can’t see all the sensors that allow an autonomous vehicle to navigate around both stationary and moving objects. The Eye solves this problem, making the interaction between humans and machines as safe and intuitive as possible. 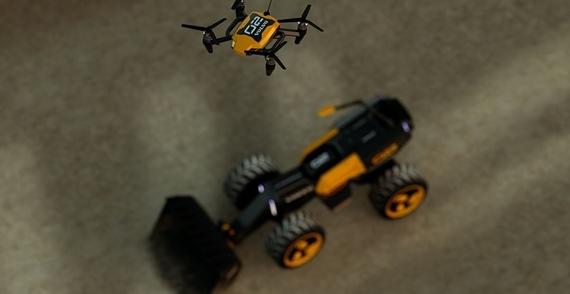 The drone hovers above the ZEUX wheel loader, making it even more aware of its surroundings, making it possible for the ZEUX to become aware of things that are out of its immediate line of sight and plan the work. 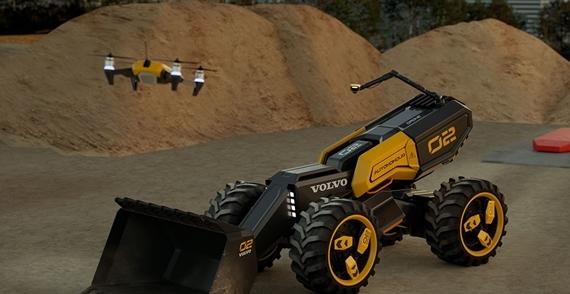 The ZEUX is designed with four 25kW electric hub motors for traction, one at each wheel. Since this machine is autonomous it needs to be able to keep its balance. So the wheels are packed with sensors, almost like the feet of a human being. This gives ZEUX both traction and excellent stability. This will also let it set the direction of the rim-pull of the wheels, when working in a pile for example. ZEUX is also equipped with Ackermann steering on both axels, to gain even more stability when in full turn. This increases its capacity dramatically. 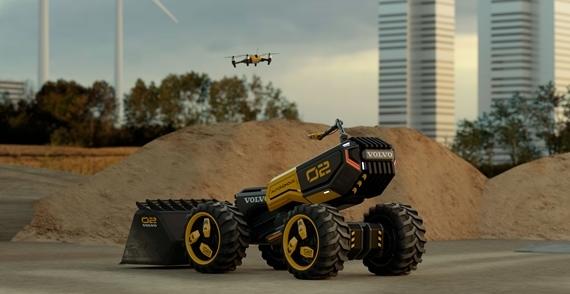 Since ZEUX does not have an operator in a cab it can perform movements of the chassis that would not be possible otherwise. The frame is what we call a scissor frame that can be lowered or raised as needed. In this way it can balance and gain the optimal position and angle for the task at hand. Balance is kept by automatic movement of the counterweight (which doubles as the battery pack). This means the ZEUX can alter its center of gravity as needed. On site this means that ZEUX can reach much higher than a conventional machine, which becomes useful while tipping. When filling the bucket the whole machine can lower itself, and when lifting back up the machine gets the lifting energy for free by automatically rebalancing the counterweight.

The ZEUX autonomous wheel loader is fully electric and its 150 kWh battery allows it to operate for between three to five hours before it will return to its charging station to charge its batteries by induction charging. This eliminates the need for it to be plugged in in order for it to recharge. This allows the ZEUX to operate more or less continuously.

Together with LEGO® Technic designers and a bunch of amazing kids, we’ve developed the Volvo Concept Wheel Loader ZEUX packed with some truly spectacular features.