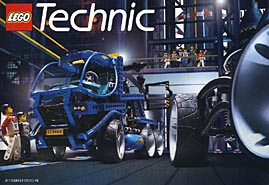 No less than 25 new sets were released. These included quite a few small sets including a Shell promotional set and a series of 6 "micro" sets that were available only in Europe, several medium sets, such as the 8417 Mag Wheel Master and large, electronic sets such as the 8483 Cybermaster and 9719 Mindstorms set.

There were quite a few new elements released, including the corrugated tubes, new low profile tires, the spring loaded cannon and projectile, as well as the Cybermaster and Mindstorms electronics. 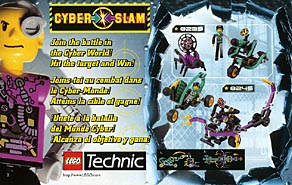 Cyber Slam:
A new theme, marketed as Cyber Slam in North America or Competition in Europe, was the first Technic theme since the Arctic Action Sets more than a decade ago. The new theme involved robot-like models that could fight each other, typically with spring loaded projectiles that would strike an opposing target and cause an action figure to spring off the model. The initial series consisted of 4 sets with 2 more released in 1999. The theme is an example of the move away from construction based to activity based sets. 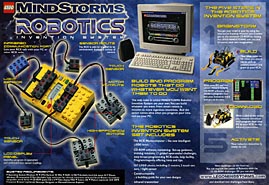 Mindstorms:
1998 also saw the release of Mindstorms, the first fully programmable Lego sets. The history of Mindstorms begins in 1989 when Lego began to fund a chair for learning research at the MIT Media Lab. One of these projects was a programmable interface for Lego robots - the Programmable Brick. Lego took much of this technology and developed a commercial product, the RCX.

The 9719 Robotic Invention System, the first Mindstorms set, was released in the Fall of 1998, Although they were clearly Technic sets, Mindstorms was marketed as a separate product line and given 97xx series set numbers. The RIS was soon followed by 2 expansion sets. Lego underestimated demand and the initial 80,000 sets were sold out well before Christmas.

The corrugated tube:
The corrugated tube was a flexible tube molded out of soft plastic with a uniformly grooved cross section and perpendicularly cut ends. The inside diameter of the tube allowed a connector peg, cross axle or Lego stud or similarly shaped element to snugly fit by friction. This allowed the tube to be connected at both ends and assume various shapes, including curves. Also because the tubes were uniform it was relatively easy to cut them to the desired length.

This element is a good example of the new decorative elements and, along with the flexible cross axles released in 1999, represent a new class of elements that could mimic the outline of a curve. They would both be widely used in Technic construction.

The RCX in situ

The RCX:
The programmable interface, marketed as the RCX, was easily the most complicated device that Lego had ever produced. It consisted of a housing with an LCD panel, several buttons, a speaker and 6 9V electrical connections, 3 serving as inputs and 3 serving as outputs. Inside was a battery holder and PCB with an Hitachi H8 microprocessor and 32K of RAM, The device could accept information from sensors attached to the inputs and execute programs created by the user, causing it to perform various actions.

The programming for the RCX was done on a computer using an updated graphical version of Lego's Logo programming language. These programs were then downloaded to the RCX by an IR transmitter and stored in RAM on the RCX.

The RCX put Lego in the unusual position of being a computer hardware and software developer, so when the hobbyists reverse engineered the electronics and published software tools, Lego wisely released the SDK's. It was this step, perhaps more than any other, that resulted in a successful product line

9719 Robotic Invention System:
The first of the Mindstorms sets, the 9719 Robotic Invention System v1.0, included the RCX, the IR transmitter, 2 motors, 2 touch sensors, a light sensor as well as a number of conducting leads, even a PC serial interface cable. The manual, called a 'Constructopedia' included typical construction techniques and the software included several simple projects.

In many ways the RIS was a return to the Universal sets of the 1970's, rather then present elaborate models the set offered only partial models and suggestions. It was up to the user to design and build their own models.