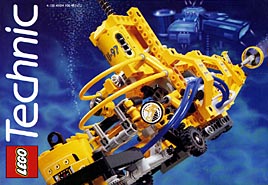 There were quite a few new elements released, including additions to older systems, such as a slip gear, a pneumatic air tank and new high torque 9V motor, as well as many elements designed for new systems, such as the angle connectors and bar code reader.

2 different Technics:
The sets of 1997 also mark the beginning of Technic into 2 different concepts. Small, easy to build and highly modular sets with high play value but limited functionality, and large, realistic and increasingly electronically controlled sets. This division would greatly widen over the next few years.

The angle connectors:
The angle connectors, a modification of the earlier axle extender, were sleeves with cross axle holes in one or both ends and a connector peg hole in the center. The series, numbered 1-6, allowed 2 cross axles to be connected at any angle from 90 to 180 deg in 22.5 deg increments. The result was a functional replacement for the old toothed connectors and plates, albeit much stronger and more widely useful. Although one early design patent shows a 4-way connector, this element was never produced.

These new element marked the end of the toothed elements and over the next few years many of them would be replaced with non-toothed equivalents.

Code Pilot:
The bar code reader, marketed as the Code Pilot, was the first of many highly integrated microprocessor controlled systems that would be introduced over the next few years. The device consisted of a housing with an LED reader, several buttons, a speaker and 2 9V electrical connections, one serving as an input and another as a output. Inside was a battery holder and PCB with a Zilog 2998 microprocessor, The device could read and store bar codes which could then be executed by the reader, causing it to perform various actions.

The Code Pilot could accept input 2 ways: by using the LED to read a barcode or timing wheel, or by using a sensor, such as a touch sensor, attached to the input port. It also had 2 ways to output: by tones from the speaker or by electrical output to the output port. additionally, a number of programs, tones and synthesized sounds were stored in ROM.

The Code Pilot represented a major technological jump from the Control Center, but was still rather limited. Almost as soon as it was released it was seen as a stop gap device before the release of the RCX. It was only available in the 8479 Bar Code Multi Set.

8205 Bungee Blaster:
The 8205 Bungee Blaster was the smallest set to date and a good indicator of the new, small sets designed with play value as the primary goal. The set built a small dragster that included an elastic cord that was wound on a spool connected by pinion gears to the rear axle. By pulling the model backwards the cord would wind on the spool, then unwind when let go. A Technic version of the rubber band car. The same set was also marketed in red as the promotional 2129, allowing children to buy both and race them. Overall, a surprisingly fun, well designed small set.