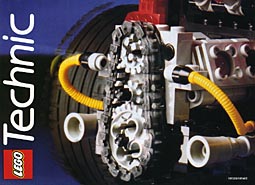 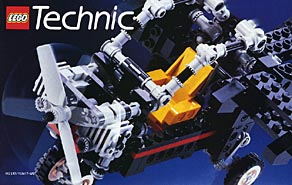 There were a number new parts released including a new electric switch, a micromotor, the cross block and catch, as well as new, large rubber tires.

The cross block:
The cross block is an element that allows a cross axle to be attached at a 90 deg angle to a connector. The result was much more compact than the previous use of stacked beams or toggle joints, for example. This element, and the closely related catch, have proved to be remarkably useful in a wide variety of Technic constructions and over the years Lego would develop many variants.

The polarity switch:
The polarity switch consisted of a plate with metal contacts terminating in a series of leaf springs and a grooved rotatable shaft with axial notches. The leaf spring fit into the groove and when the round shaft was turned the notch would press down on the spring, creating an electrical connection. Because of the arrangement of leaf spring and notches, rotating the shaft would alternately create and break electrical connections, allowing the switch to be used as a pole reverser.

8082 Multi Control Set:
The 9V 8082 Multi Control Set was the first set to use these new 9V electric elements. It featured the now common 9V motor as well as the new 9V micromotor and polarity switch. This allowed for the construction of models that had multiple, separately-controlled, electric functions. The main model, for example, was a vehicle that used the motor to power the car and the micromotor to control the steering.