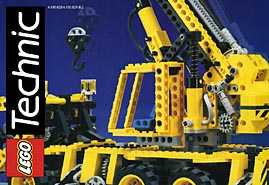 9 new sets, including several vehicles, a helicopter, and several pieces of construction equipment, representing virtually all of the typical Technic subjects. were released. Starting in 1995 Lego changed their set numbering, Technic sets were assigned new 82xx or 84xx set numbers. The smaller sets were given 8200 numbers and marketed under the term "Tech Play" and the larger "Tech Build" sets were given 8400 series numbers.

The gear box:
Perhaps as a reaction to the increasing complexity of Technic sets, Lego designers developed a simplified gearbox that would allow children to more easily create gear assemblies. The result, shown the 1995 patent application, was 2 different gearbox casings. The casings had guide grooves that would allow various pinion, worm or bevel gears to be simply dropped in place. These gears were then held in position with cross axles placed through holes on their sides. This allowed for easy construction of rather compact gear assemblies.

These gear boxes were used in most medium and large 1995 sets and would be widely used in later sets. variants of the basic design would form the basis of the late 1990's robots.

8460 Pneumatic Crane Truck:
The 3rd and perhaps definitive Technic crane. The Pneumatic Crane Truck was the most complex Technic crane to date. It featured a rotatable boom and superstructure on a technic turntable. The boom could be raised or lowered via 2 opposed pneumatic cylinders and could be extended by a rack mechanism. The model also had 4 outriggers controlled via a gear assembly as well as front wheel steering. The overall design, including the cab, boom and superstructure came remarkably close to the appearance of the prototype.

This model was so highly regarded that Lego rereleased it in 2002. 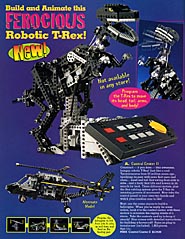 8485 Control Center II:
The 2nd Control Center set. This set included an updated Control Center that had a provision for a 9V adaptor. The set included instructions for 3 models, most notably a helicopter landing pad and a mechanical dinosaur. Both of these models were rather complex and utilized the 3-motor programmability of the Control Center much better than the original set. This signaled the beginning of many new electronic elements that would appear over the next 5 years.