8 new sets, including 2 more Universal sets. were released. The 8062 was the first Technic set to be packaged in a plastic storage case. Again, the retail assortment ranged from very small (the 92 piece F1 Racer) to the very large (1300+ piece Super Car).

There were quite a few new elements, including many specialized vehicle elements such as steering wheels, 2 new sets of steering arms and a transmission assembly.

The transmission:
Yet another highly-specialized vehicle mechanism, the transmission, was introduced. The patent shows 2 drive shafts, each with a cylindrical driving ring containing annular guide flanges and pointed claws at both ends. When the driving ring was slid to end of the shaft by a shifter that fit in the flanges the arrow-like claws would engage into hollow spur gears, acting as a claw clutch. The result was a compact system that allowed easy gear changes, even when the drive shafts were not rotating. In essence, a synchronized transmission. 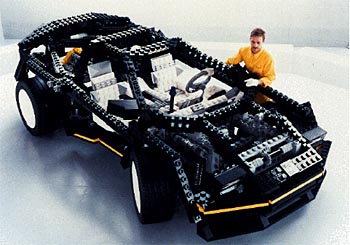 8880 Super Car:
The 4th auto chassis, the 8880 Super Car, can legitimately lay claim as the most complex Lego set ever produced. It took advantage of every specialized vehicle assembly available in Technic: 4 wheel independent suspension and steering using a modified cardan joint as well a no less than 3 differentials and eight large shock absorbers; 4 speed transmission using the new transmission assembly connected via chain to an 8 cylinder engine using the new engine elements. Other features included pop up headlights using a lever on the dashboard and an opening trunk. It was also the first auto chassis to attempt a complete body. again, as was now common, curves were simulated using hinged plates. in fact the model used no less than 52 hinges.

Unfortunately for Lego they were approaching a ceiling where these large sets were simply too complex for children to build. The Super Car, for example, had a dense 50-page instruction booklet, with additional correction pages, and could take an experienced builder 4+ hours up to 8 hours for a beginner to build.