In Europe, 2 new models, a small go-cart and a large crane, as well as a new supplementary set were released. The theme was finally released in the US under the name "Expert Builder" and were given 900 series set numbers. The initial release included 4 models, the motor set and a supplementary set. This difference between US and European availability has become standard Lego marketing practice, in fact there has never been a year with a common retail Technic assortment.

In addition to the new 16t gear, chain links and gear reducing blocks were introduced in set 872. The blocks connected to the 4.5 V motor and allowed for a 1:20 gear reduction in a much smaller space than would be required with Technic gears. 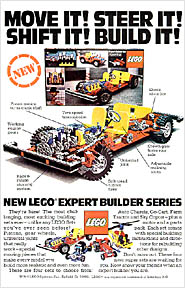 855 Mobile Crane:
Another of the first generation Technic sets, the 855 Mobile Crane was the first of the crane models. This set featured an extendable boom that could be raised, lowered or rotated 360 degrees. It also had a hook that could be raised or lowered. Similar to the rest of the first generation models, much of the cranes' construction was with standard Lego elements, especially plates and 2x2 tiles.