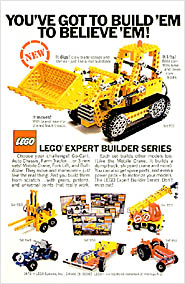 856 Bulldozer:
Construction equipment has always been a common Technic theme and the 856 bulldozer was an good early example. The bulldozer included realistic treads running on 40t gears and a front scoop that could be raised and lowered as well as tipped forward and back via an interesting rack and gear mechanism. Although still largely based on regular bricks and plates this model signaled the beginning of more complex designs that were possible with Technic elements, particularly the use of cross axles.