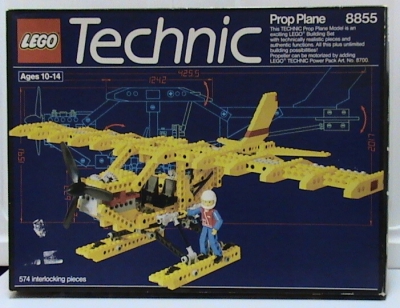 Set 8855 was released in 1988 as the first (and best) Technic airplane.  It features a one cylinder reciprocating engine driving a unique 3 blade propeller, and movable ailerons and elevators controlled via a stick in the cockpit.  There is also a Technic figure which can sit in either pilot seat.

This model of a high wing float plane is something you can see flying tourists from Lake Union to Canada every day of the week in my home of Washington State.  The high wing not only keeps the lift away from the water, is also offers excellent downward visibility for the passenger(s).

This model is simply huge. With a wingspan of 72 studs, it is the widest Technic set ever made until set 42025 which is 77 studs wide. The flight controls are amazingly realistic. If it had a rudder and rudder pedals, it would be perfect. The 3 blade propeller is designed specifically to drive one of the square pistons, and this is the only set which ever used it. The wing construction is extremely similar to that of a real airplane with a semi-mono coque structure. It has a front and rear spar, ribs (made from new tapered beams) at even intervals, and even the general shape of the leading and trailing edges is accurate. It is only missing stressed skin but, if it did have skin, the wonderful internals would be hidden. If you are only going to own one Technic airplane, make it this one.

This single cylinder engine is not particularly realistic, but is the only one which would adequately fit in the space available.  The cylinder actually faces down instead of up which would lead to significant amounts of oil being burned, but no worse than many 1940's era radial engines.

The unique 3 blade propeller passes through an integral 4L beam and into a 24 tooth spur gear with an offset axle hole.  The offset axle holes of the 24 tooth gears are used to make a crankshaft.  Connectors placed end to end and clocked 90 degrees form a rod which connects to a specialized 2x2 square piston.  The "cylinder" is actually square.

To control the rotation around the axes of 3-dimensional Euclidean space, a real airplane uses a control column (or stick) and rudder pedals.  Movement of the stick fore and aft controls pitch, and side to side controls roll.  Aft stick is a nose up command, and right stick is a clockwise roll.  Rudder pedals control yaw.  This model accurately represents the function of the stick, including moving in the right directions.  There are no rudder pedals.

The only inaccuracy is that there should be a separate column for pilot and copilot.  Aircraft which use side sticks typically have them at the outboard side, not in the center.

The second photo shows the interconnected mechanism which drives the ailerons and elevators.  More about this below.

The primary control surfaces of aircraft which control roll are ailerons.  These panels on the trailing edge of wings move in opposite directions (one moves up while the other moves down).  Large aircraft may have both inboard and outboard ailerons, and even more roll control may be obtained through the use of flight spoilers.

In this model, left and right motion of the control stick rotates a longitudinal axle.  This axle drives a triplet of 16 tooth spur gears.  The final gear rotates a 3 blade rotor piece.  A pair of the new tie rods attach via ball joints to crank arms on the wings.  These crank arms turns axles which run outboard to the ailerons.  The direction of rotation is reversed via a pair of 8 tooth gears to make the aileron motion accurate with respect to the control stick.

The primary control surfaces of aircraft which control pitch are elevators.  These are typically panels on the trailing edge of the horizontal stabilizer but, in this case, the entire horizontal stabilizer pivots.  This is sometimes called a "stabilator".  The two sides move in tandem, always in the same direction with respect to each other.

In this model, forward and aft motion of the control stick  pushes and pulls one of the new tie rods via ball joints.  The tie rod pushes or pulls an axle which rotates a crank.  The crank reverses the direction of motion and then pushes or pulls a long link which goes all the way to the tail.  The stabilizer pivots around a pair of pins.

This aircraft has both floats and landing gear so it can be operated from either land or water.  The floats are supported by an elaborate truss system constructed from toothed connectors as seen in the photo.  The 4 small tires are hidden within the floats.