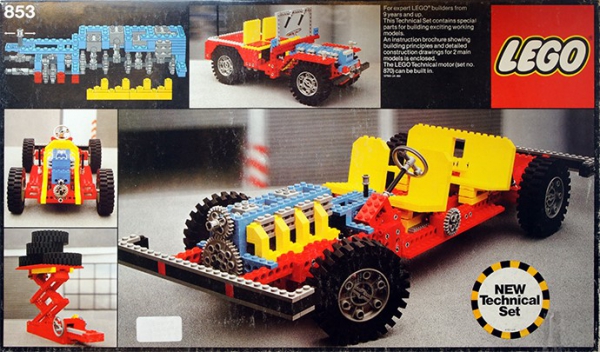 Set 853 was released under the "Technical Set" series in 1977 in Europe.  It made it to the US in 1978 with the number 956 as an "Expert Builder"set.  This "Super Car" features a 4 cylinder in-line engine, a 2 speed transmission, steering, and adjustable seats.  The back seat arm rest even stows!  Traditional studded construction is used almost exclusively.

For the time, this car has everything.  It is by far the most complicated set of the first year, and would remain so until 1980.  It is the only set with an engine, and has a long list of functionality.  This first Auto Chassis set the stage for a series of increasingly complicated "Super Cars", culminating in the 8880.  (Yes, I know there were Super Cars after the 8880, but none ever matched its technical prowess.)  It is also huge and remains longer than any of the other LEGO® cars.

The front wheels can be steered using a  wheel at the driver's position.  As can be seen in the computer generated image, the wheel drives an axle connected to an 8 tooth pinion gear via a pair of universal joints.  The pinion drives an identical pinion to reverse the direction of rotation so that the wheels will turn the direction of the steering wheel.  The second axle and pinion drive a rack.  The rack uses links to attach to the control arms of the steering mechanism.  The steering mechanism itself uses 6 traditional 2x2 swivels with 2 pair allowing rotation of the wheels about the vertical axis and another pair acting as control arms attached to the rack gear.  Simple axles allow the wheels to rotate freely.

The engine uses the offset axle holes of the 24 tooth gears to make a crankshaft.  Connectors placed end to end and clocked 90 degrees form rods which connect to 4 specialized 2x2 square pistons.  The "cylinders" are actually square.  A 40 tooth gear on the front of the engine acts like a harmonic balancer, and the upper "timing gear" actually has no function.

The engine also has a number of aesthetic features such as cooling fins (suggesting this engine is air cooled) and an exhaust manifold.  The manifold doesn't connect to any pipes, so this engine would be really loud!

The gearbox is not synchronized in any way, so it is difficult to shift gears since they tend not to be aligned.

The slight vibration in the animation was probably caused by the thump of the bass in the killer sound system.

The rear end of the car consists of a continuous live axle, fed through a set of 24 tooth gears to the drive shaft.  There is no differential gear, so both rear wheels must turn at the same speed.  This requires that one of them skid when turning.

There are a pair of links which simulate shock absorbers, but these can actually not change length and provide no suspension function.

The front bucket seats are constructed entirely from bricks and can be moved forward and back via a rack and pinion system controlled on either side of the seat.  The range of motion is quite large, as can be seen in the animation.

The rear bench seat is not adjustable, but the armrest can be stowed.

This set uses four foam 24x43 tires and wheels, the biggest foam tire that LEGO® made.
These tyres are still used by MOC-ers a lot as truck weels.