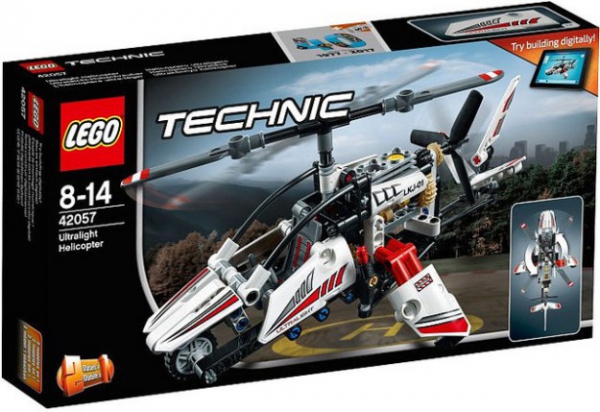 Even if it’s named at “helicopter”, the Lego Technic 42057 is a autogyro/gyroplane with a big main rotor and a vertical rotor on the rear.

There is also a 2-cylinder engine in the back. The main color is white, with red stripes printed on stickers and it contains 199 pieces. Although I prefer cars as entry models to get yourself familiar with Lego Technic this set is a nice one as well for beginners. You can 'steer' your helicopter with the small red lever on the side to orientate the tail rudder.

The B-model looks like a single person flying car. A nice fantasy design which is fun building as well. The fun is that in this relative small set 2 ways of engine configuration are shown. In the A-model a line setup of 2 cylinders, in the B-model a boxer setup.

Because this set contains 3 wheels I expect with some imagination you can design a trike.