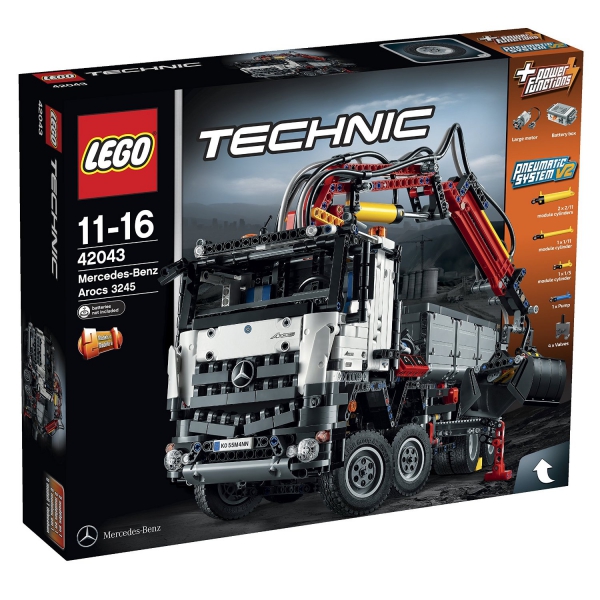 The set is launched in August 2015. It is the 3rd car brand lisencing. The other ones are the Mercedes-Benz Unimog from 2011 and the Volvo L350F Wheel Loader from 2014. This set I consider a flagship set with its huge amount of detail and lots of parts. This set contains 2793 parts!! Which means for me hours of building time. I am a technic fan who likes to explore new sets and build them accurately and understand all the functionality while building. Which means for this set it was around 10 plus hours spread over 10 days.

I still have a job I need to spend time on. This set is one big mind blowing construction with mechanic and pneumatic functions. The set is divided in 6 steps with equal numbered bags of parts. The modules are:

This is also finally a set where the chairs have more detail than just using technic liftarms L-form 3x5. the cabin grill is amazing in detail and almost equal to the real thing. You recognize immediately that the designer was streching the use of Lego

. I find it quite innovative using the Technic, Pin 1/2 with 2L Bar Extension, for the grill of the truck. With the little angle for the lower row and the usage of Technic, Axle and Pin Connector Perpendicular Double Split, just mimics the grill perfectly. Although the real truck has 4 rows in the grill the Lego version with 3 rows does just fine. I put the fronts of the real and lego version side by side for comparison. As you can see the form is well mimiced. The opening doors are something you don't see to often in technic sets, which means for this set Lego wanted to go all the way. With regards to safety Lego did invest as well with 2 dead angle mirrors for the front and the right side. Our little Lego friends in traffic on their bikes or by foot are save.

I am also happy with the white color. I received this set together with the cargo plan. It is refreshing to build with another color than red what was more or less the standard for bigger sets. This set also comes with a considerable amount of new pieces, 16 to be exact. Especially the gear housing for a gear rack to better mimic stabalizers. I love this part. Although it is a big part you can now better build in a more compact way truck car ambulances. The new pneumatic nozzles are a big improvement. The former nozzles was sometime nerve racking to get the 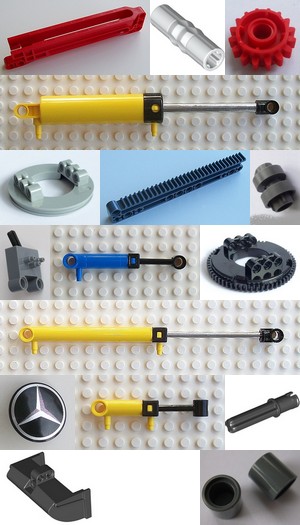 hose on the nozzle under an unnatural angles sitting upside down. Now the hose just slips on the nozzle like an average glove on a hand. I am wondering why switching to the 3L gear switcher. For this set I don't see the advantage other than that it fits the uneven length and width of sets since introducing the technic liftarms.

The power chase setup is well designed again. From the center a PF L engine provides power. From the main axle the power is moved into left and right switches. In this picture each color represents a distribution to a function. The orange color represents the power from the engine to the switchers. 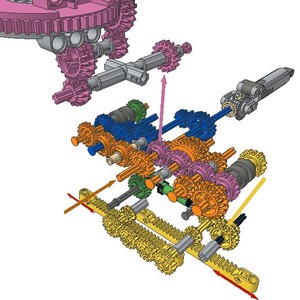 Together with the battery box switch you can easiliy play with the functions and the pneumatic crane. I hope on purpose the switch for the turning of the crane is on the opposite side from the air pump. So operating the pneumatics on the crane you can also turn it.

Even the amount of new parts is huge in this set. Altogether 16 new parts applied. Where for me the digger bucket and gear rack and holder are one of the parts with most opportunities.

The driveline of this set is extraordinary as well. The 8x4 driveline is again with independent suspension and a clever usage of the small 3x3 turntable. This solution gives an acceptable solution to keep a twist possibility with maximum stability and a good way to distribute the drive from the most rear axle. Below a picture of the drive line up to the 6 cyclinder line engine. 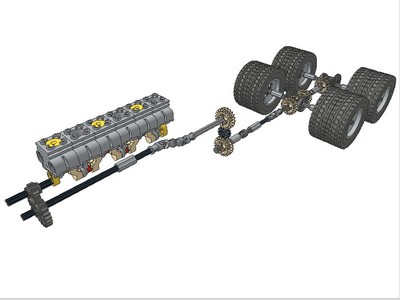 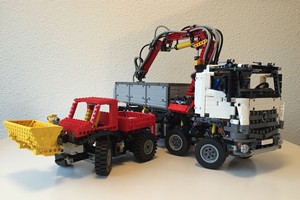 Because I am into the history of Lego technic why not a duo photo with the 1981 Power Truck, which in fact is a first attempt to mimic a Unimog. At least in my eyes. Back then already owned by Mercedes-Benz so two multi purpose vehicles in one picture.